This was the first node developed. It measures temperature, light levels, and includes an event input for future use. 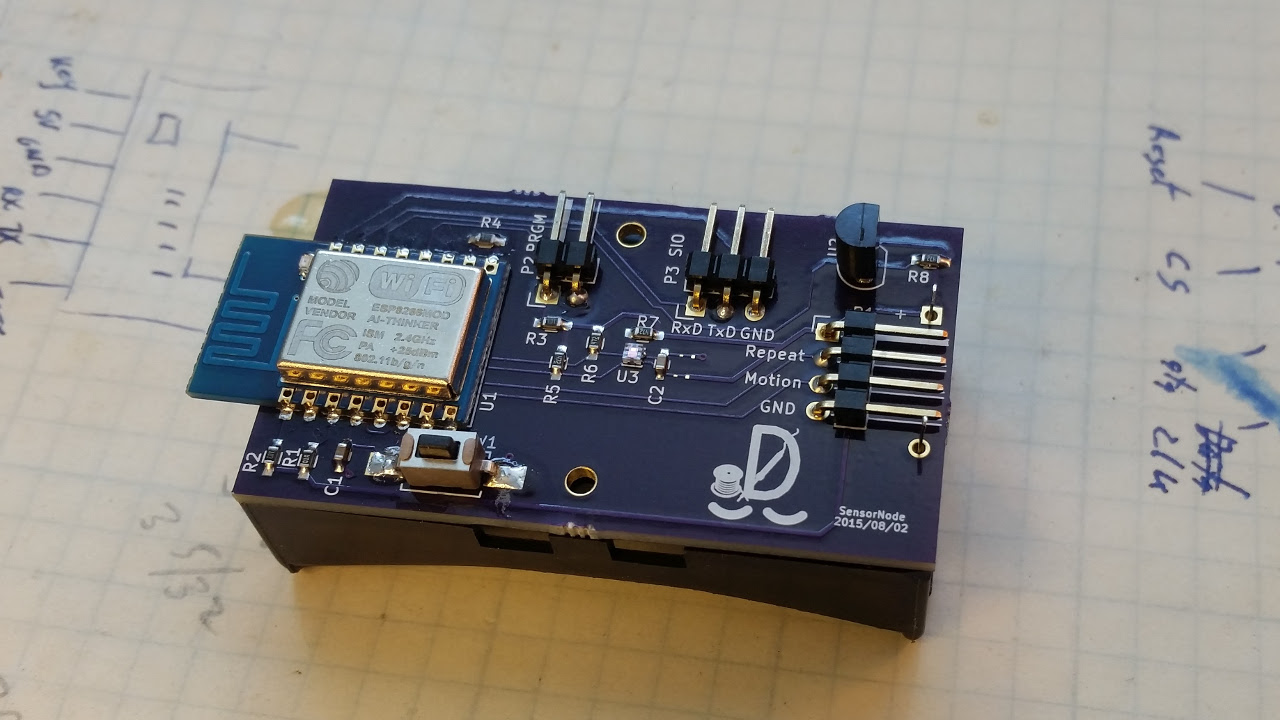 The original concept only measured temperature. However that seemed like a waste of signals, processing power and board space so a light sensor and a motion sensor were added.

Full schematics for the T&L Node are available on GitHub.

As of December 2015, six (6) T&L Nodes have been build using boards fabricated by OSH Park with most of the parts purchased from DigiKey. The ESP-12 modules were purchased from Amazon and Bang good.

The total cost of parts, including the PCB, but not the batteries or the motion sensor was $15.56 each.

Temperature is measured using the DS18B20-PAR

This part was chosen because I have worked with it before and found it easy to use. I designed the T&L Node to use the DS18B20.

The DS18B20 (either version) was not a very good choice because it has a higher minimum operating voltage (3v) than the other components. The parts I have received seem to work fine to voltages as low as 2.5v, but that can’t be expected of all parts.

The sensor is smaller that I envisioned when I was designing the T&L Node. It turned out to be difficult to identify pin 1 on the part when placing it on the PCB. That said, I didn’t have any problems getting it soldered to the board using the hot-plate/embossing-tool relfow method.

The motion sensor does not mount on the T&L Node, but a connector was added to allow the use of the HC-SR501 Passive Infrared Motion sensor from Adafruit.

As of December 2015 the T&L Node firmware as not been written to support the motion sensor.

I wanted the simplest possible design for the T&L Node, so I chose to power the unit directly from batteries. This turns out to be the weakest part of the design.

The documentation (at least when the design was started) for the ESP8266 seemed to indicated that the operating voltage was 1.75-3.6V, but that is now known to be correct for only the IO drivers

Still, the first T&L Nodes have worked with battery voltages as low as 2.5V.

The battery life is dependend on the battery capacity, operating current of the T&L Node, the sleep mode current, and the duty cycle between the two. Transmitting measurements every 5 minutes yields about 2 months using alkaline batteries. Using a single rechargable LiFeP04 cell yields only 2-3 weeks due to it’s lower capacity.

The alkaline battery discharge characteristics are such that most the capacity is available only by operating at voltages under 3v (for two cells). This is a problem (based on specs) for the temperature sensor and possibly the ESP8266.

LiFeP04 batteries are a better choice, from a stable voltage point of view, than alkaline batteries but the lower power density makes LiFeP04 a less attactive choice.

A future designs will need a better power source. The extra cost of a charging circuit and power connector may be worth it in order to use Li batteries and get extended run time.

Except where otherwise noted, content on this site is licensed under a Creative Commons Attribution-ShareAlike 4.0 International license.